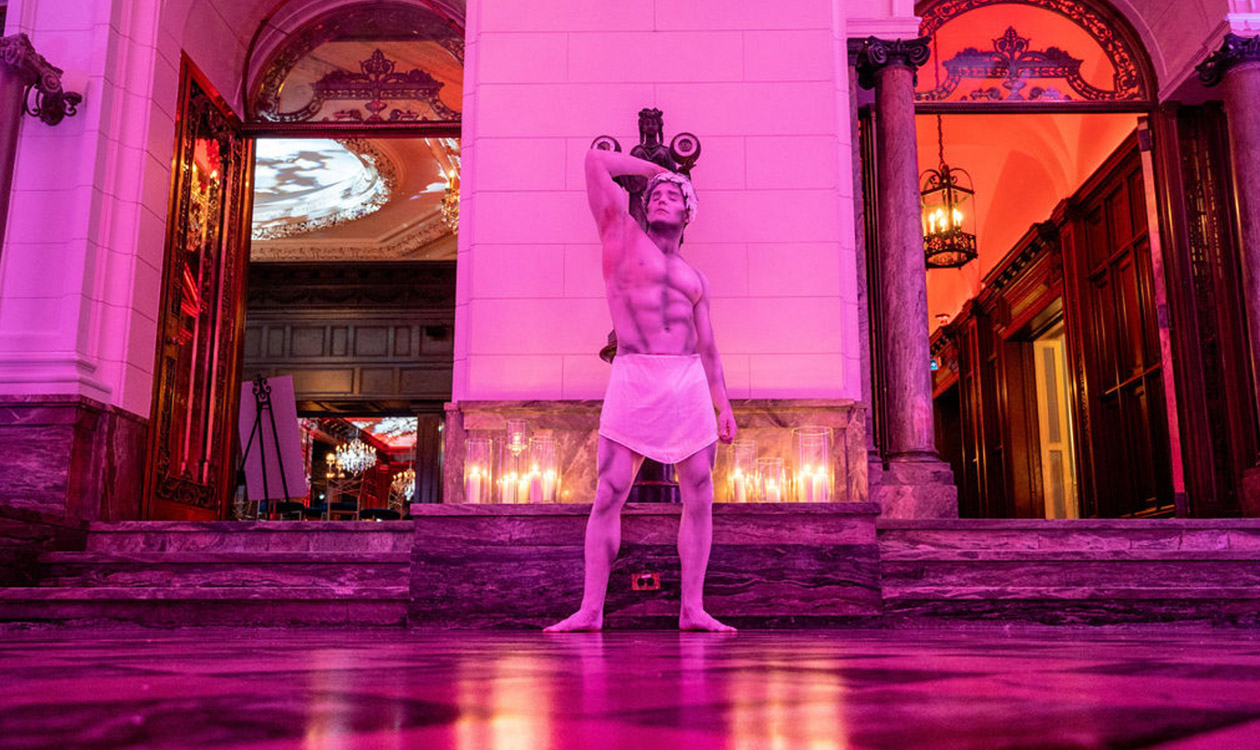 What started as an idea to enlighten and entertain clients, employees, and stakeholders, Albourne was committed to hosting this year’s annual corporate conference in a way they never had before. This October, they partnered with The Concierge Club to bring their vision to life with a series of momentous occasions.

In true Concierge Club fashion, the event was transformed into more than just a conference. It combined art and culture with top-tier entertainment—which was a clear representation of just how much Albourne values and takes care of its people.

Albourne Partners Limited is one of the largest providers of research and advice on alternative and complicated assets such as hedge funds, private equity, and real estate.

Just like in past years, Albourne held its annual conference to show the company’s commitment to its clientele—this time, with the help of a top experiential events company, The Concierge Club.

About The Concierge Club

The Concierge Club is a luxury event and experiential marketing agency in Canada. With a long list of clients including Sephora, Hewlett Packard, Hyundai, Guerlain, and Cadillac Fairview, the company has carved out a name for itself in the industry.

The Concierge Club’s renowned ability to create unique events and experiences is a testament to the agency’s attention to detail, imagination, and creativity. It is also proudly a 100% all-women, minority-owned organization.

This year, Albourne wanted to give guests an elevated experience. They came to The Concierge Club with venue options and what themes they would like to play on with one simple caveat: nothing was to be “Halloween.”

While the events were planned for October, The Concierge Club drew inspiration from the heart of the ideas behind the vision: luxury arts and culture.

The four themes were as follows: Time Warp, The Bloodsucker’s Ball, The Laboratory, and Come From Away. Each theme speaks to what Albourne wanted guests to experience—arts, culture, and luxurious entertainment, all hosted in a variety of Toronto’s most stunning venues across the city. 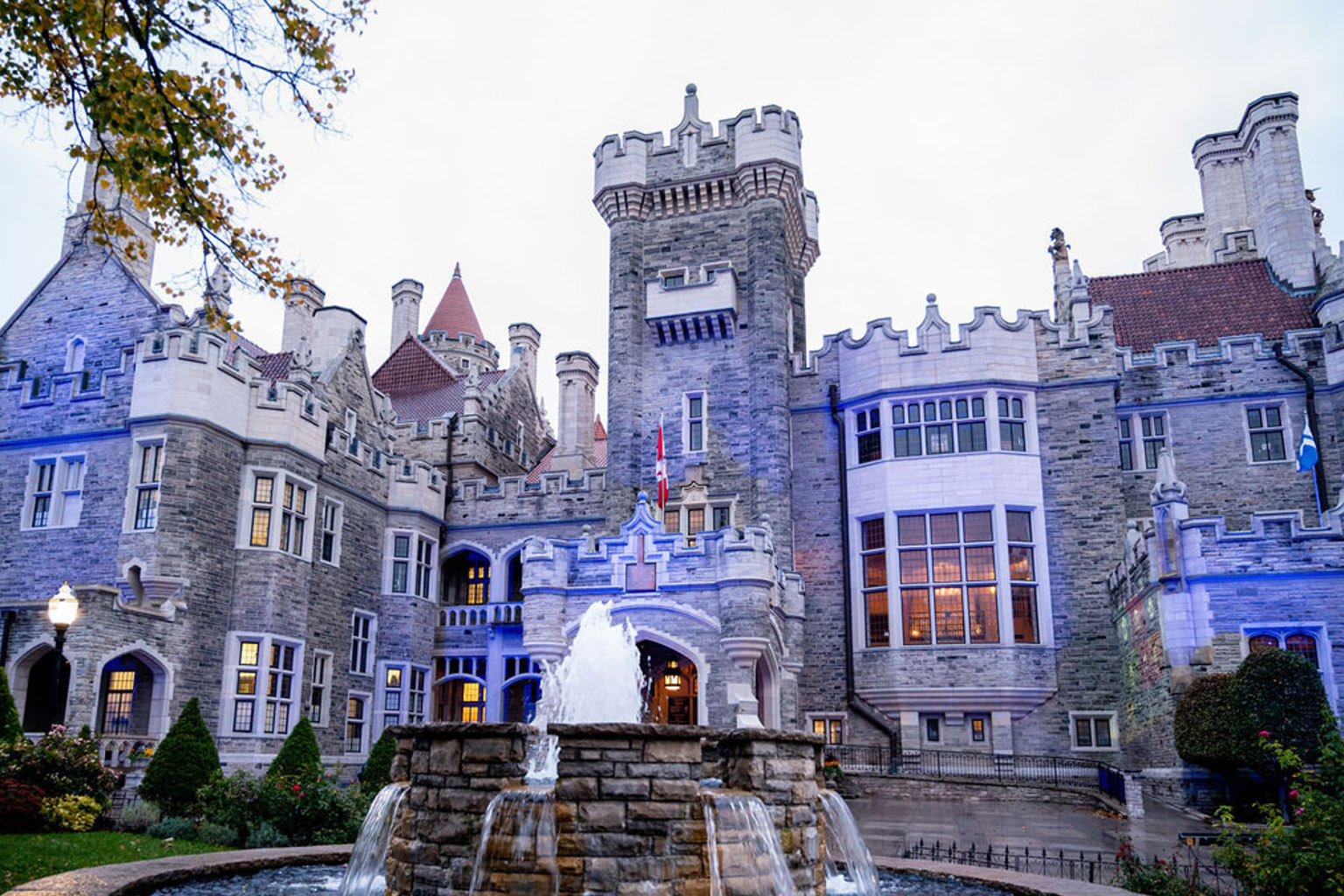 The Rocky Horror Picture Show is a musical-comedy-horror film —a film that is still considered by many as one of the greatest of all time. Ahead of its time, the film has become a cult classic by celebrating a world of conformity through iconic music, dressing in drag, and hilarious tongue-in-cheek dialogue. 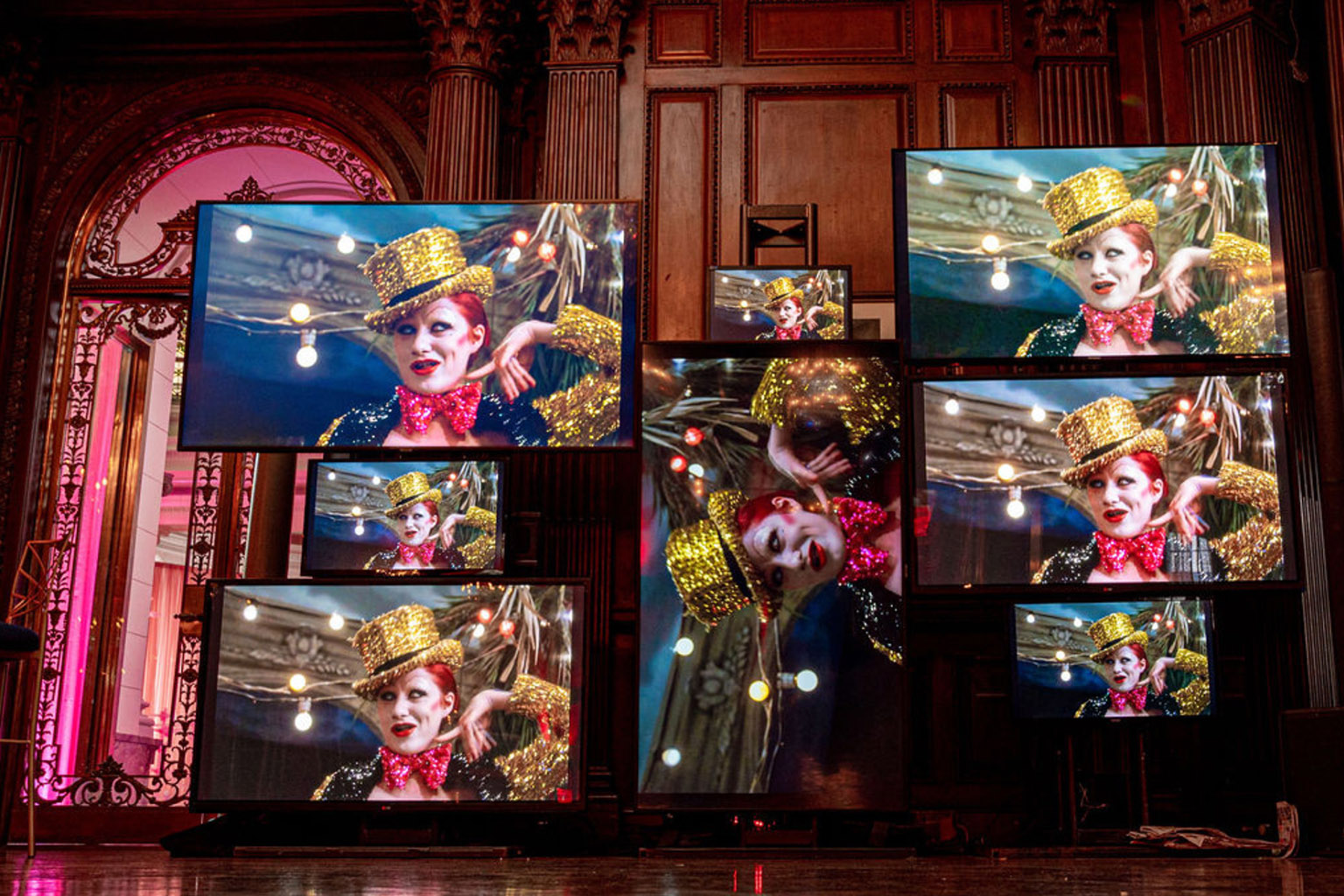 The Time Warp is an homage to the song and dance that’s performed at the beginning of the film, when unassuming Brad and Janet enter a mysterious castle. Hosted in Toronto’s historic castle-style mansion in the city, Casa Loma, it was the perfect venue to bring Time Warp to life in a larger-than-scale setup.

From the draping of the red curtains, to the velvet couches, all the way to the striking paintings of Mona Lisa—The Concierge Club didn’t miss a single detail in planning the Time Warp event.
Guests were welcome to walk around, talk, eat, and be entertained in a setting that completely immersed them as if they were part of the film. 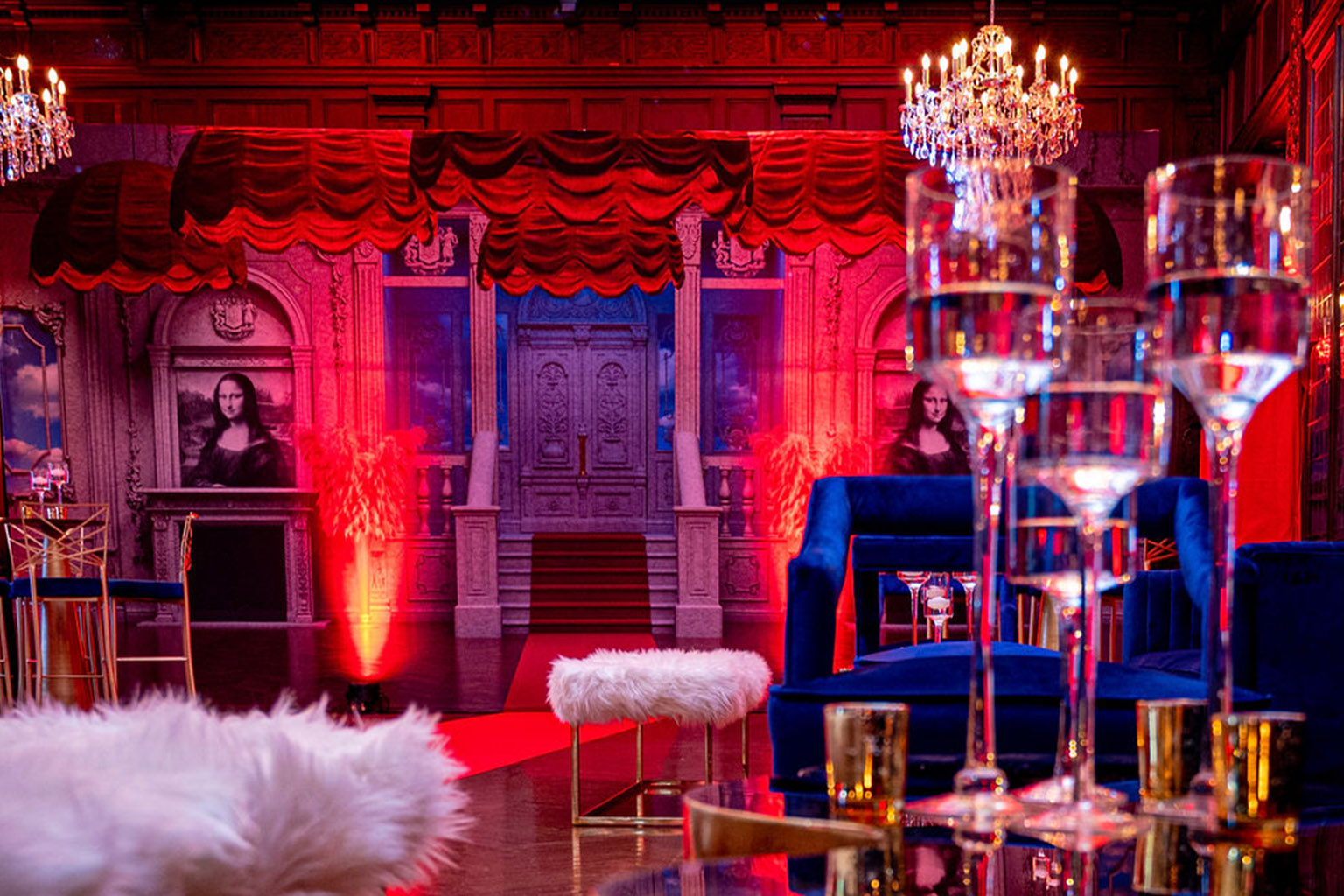 Along the same vein, The Laboratory event is another nod to The Rocky Horror Picture Show. The owner of the castle is discovered to be Dr. Frank N. Furter, an apparently mad scientist who created a muscle man named Rocky in his laboratory.

The same careful attention to detail was given to The Laboratory theme: 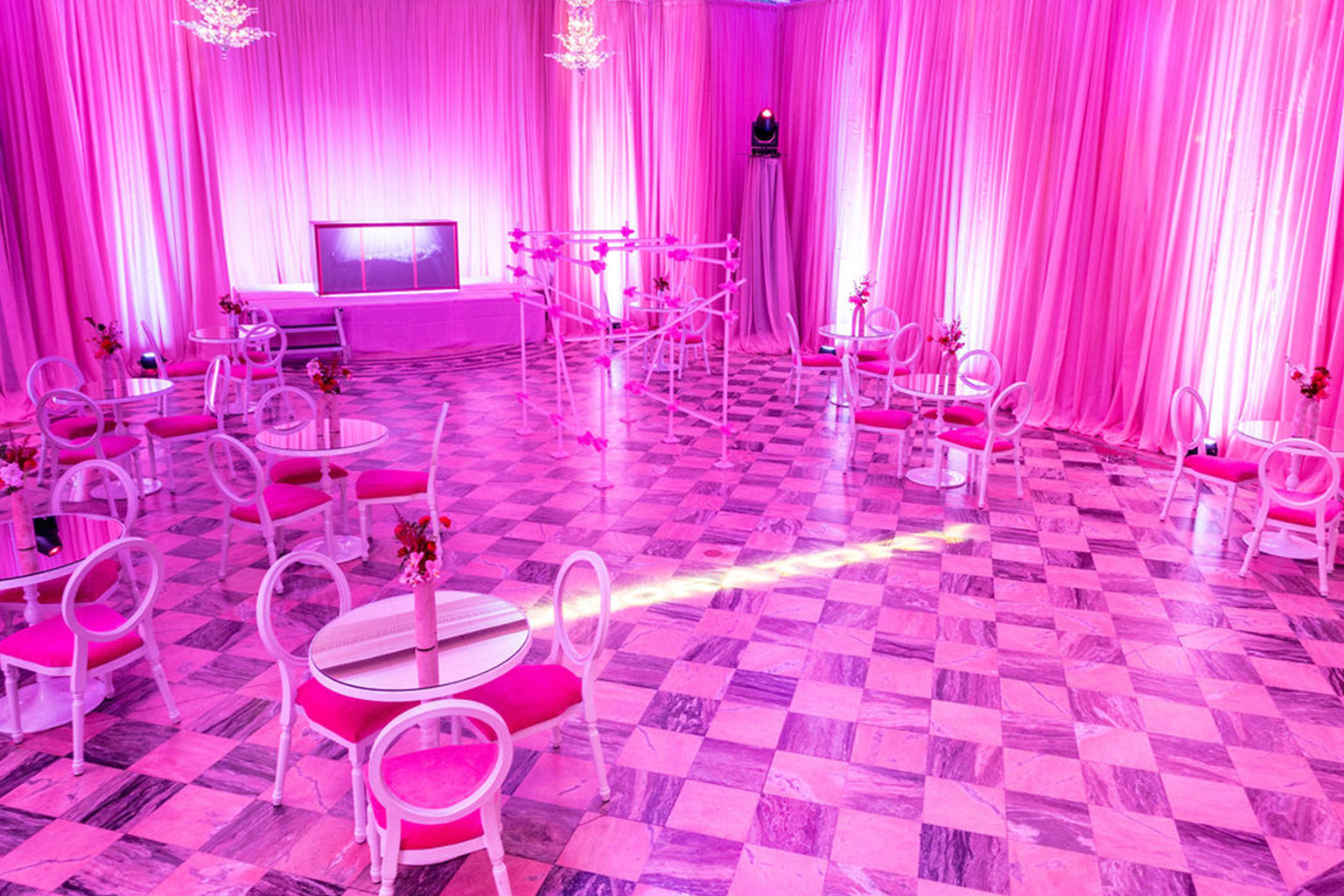 Pink walls, pink tiles, long draping curtains, and statues of sculpted men are seen in the man scientists’ laboratory in the film. 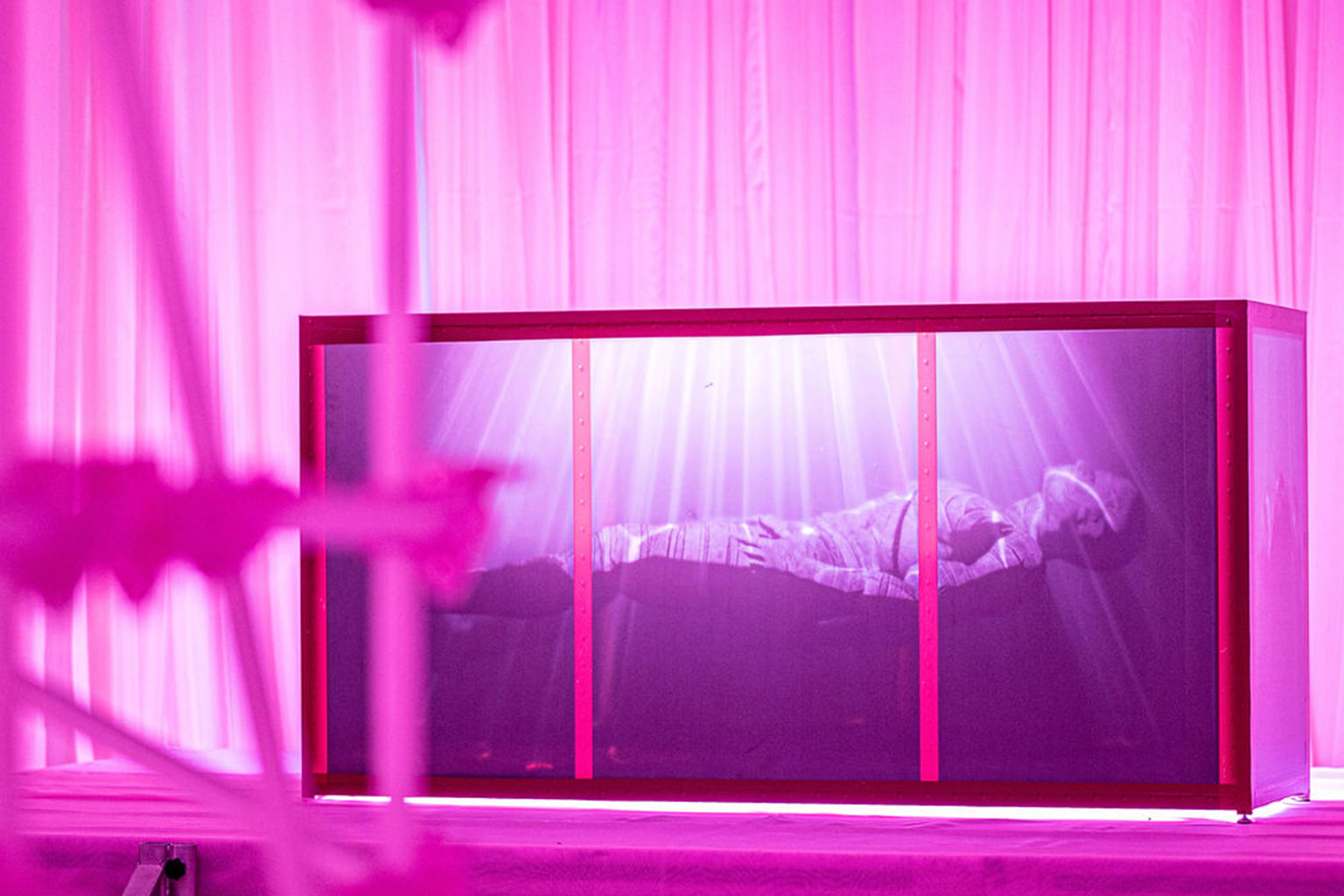 The Bloodsucker’s Ball was an adaptation of the movie, “Interview With The Vampire.” For this event, the venue, located in the Palais Royal Ballroom in Toronto, was set up to include striking visuals that exuded mystery, darkness, and romance.

The performances included a stunning “Vampire Waltz,” which was choreographed by top Canadian dancer and choreographer, Hollywood Jade. This was followed by a dance contest to get the attendees involved. 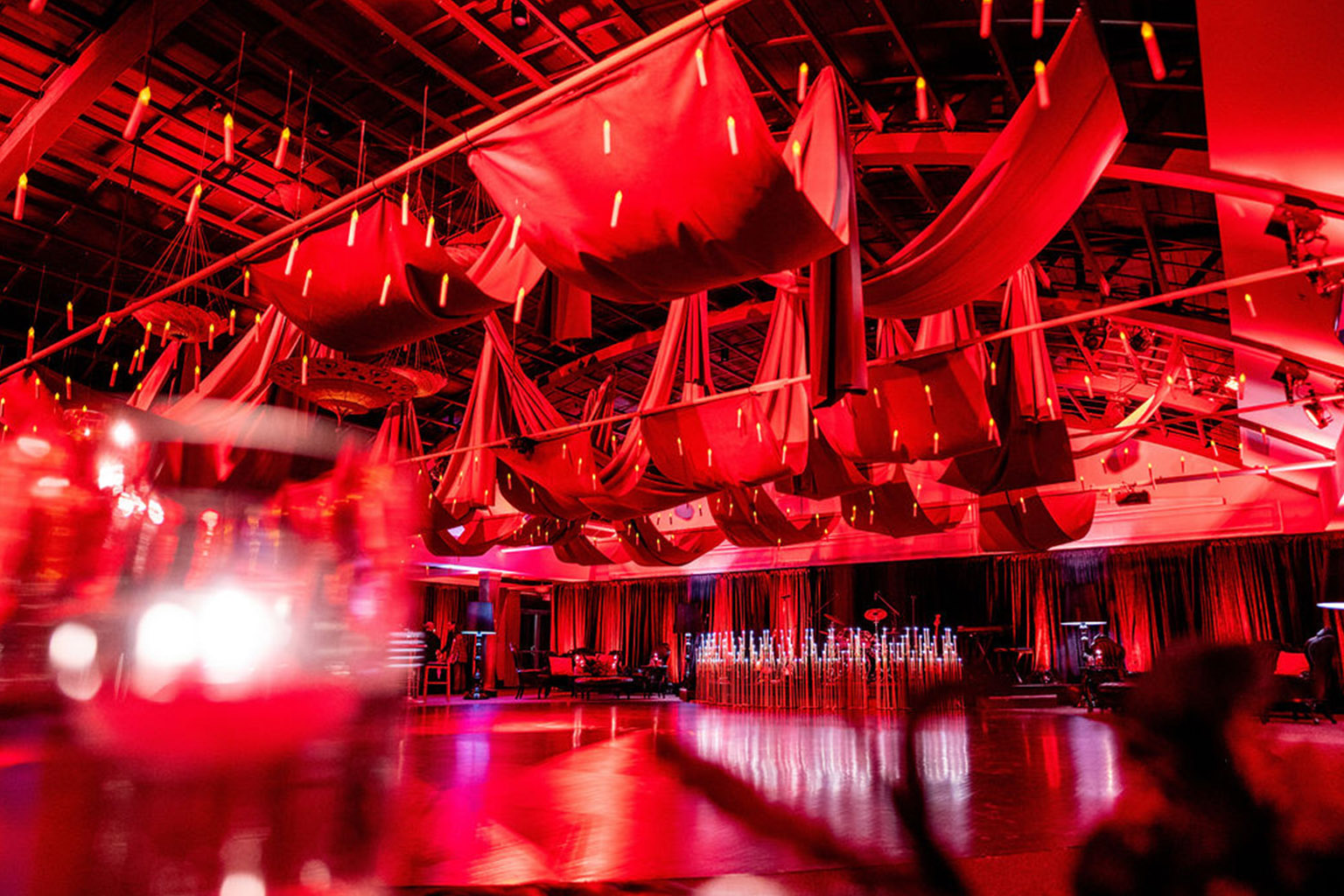 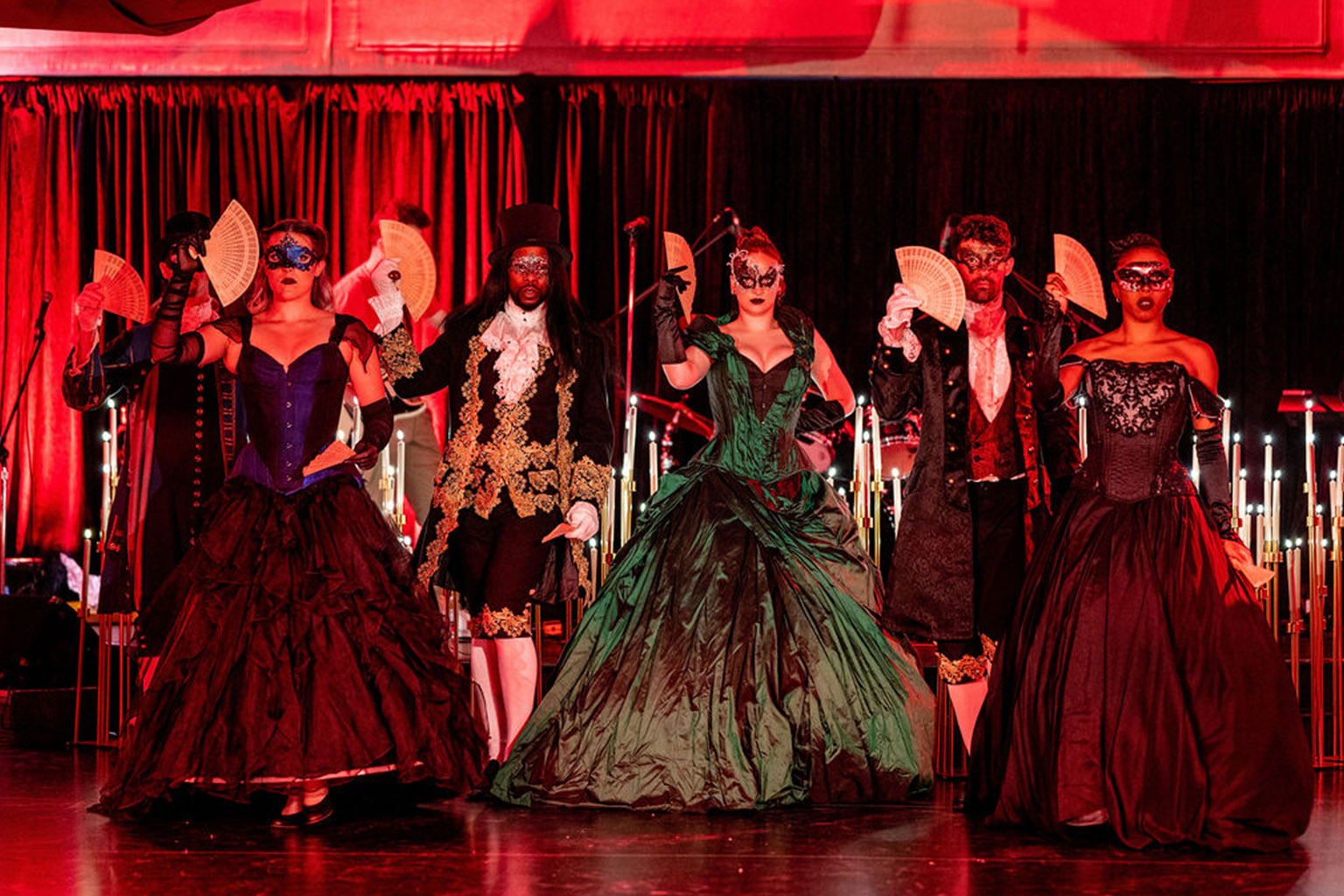 The Come From Away theme was based on the popular Canadian musical and book of the same name. The venue was set up to have a Newfoundland feel. Even the activities such as cornhole and life-size Jenga were carefully chosen to achieve the same effect. But more than that, it also aims to project human kindness during a dark time. 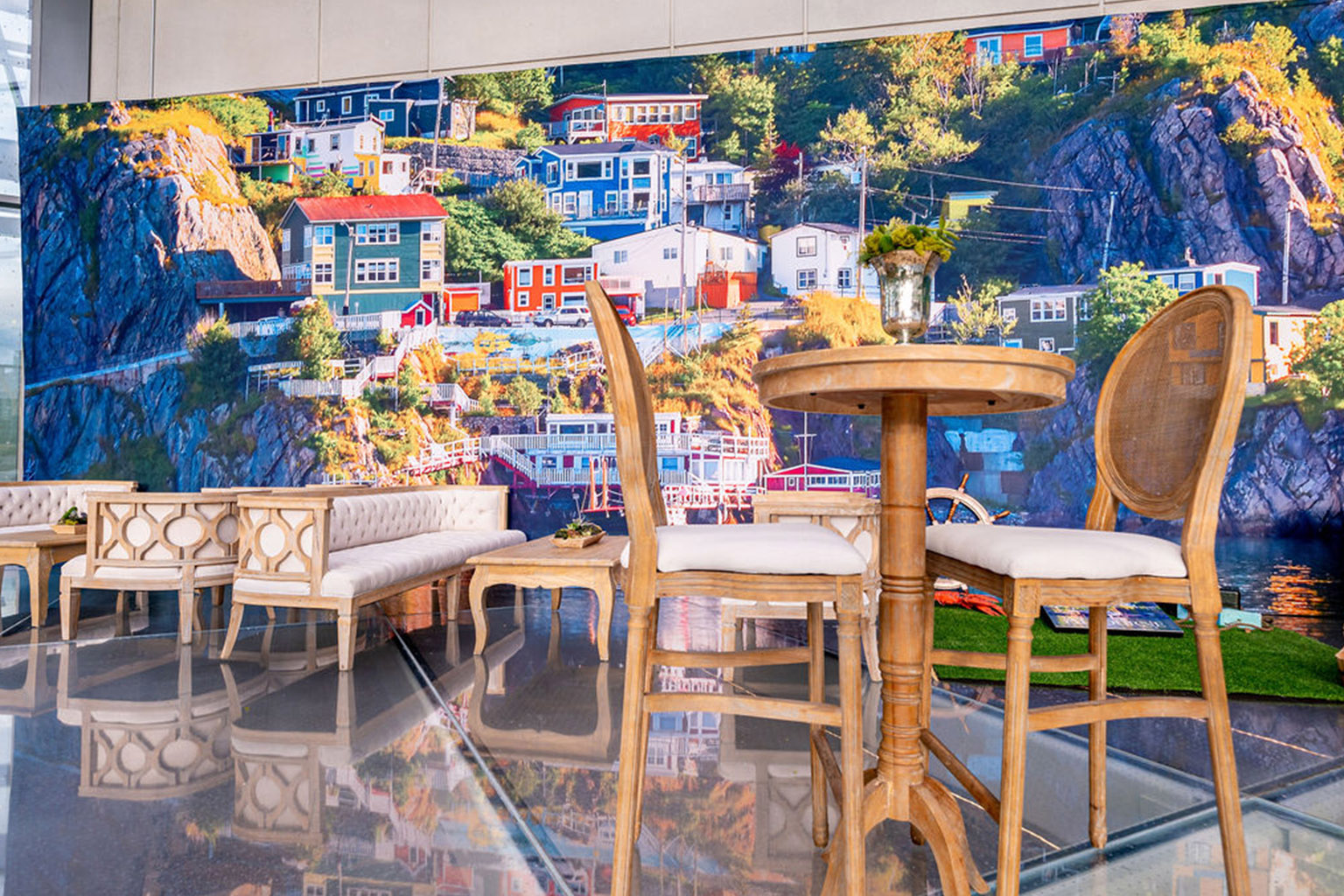 This event was executed at Hotel X in Toronto, and had a very different feel from the other Albourne events. Light and airy, mixed with nautical elements, the event showcased the rich culture behind Canada’s art scene and history.

It takes a team of visionaries and dedicated event planners, facilitators, and marketing experts to make the event a premium, luxurious, and creative experience. Another crucial strategy to make corporate events like this work is open and clear communication, not just within the theme, but with vendors and suppliers as well.

No detail was considered too small. From exquisite chandeliers and seating to curated performances, the team at The Concierge Club worked through all the nitty-gritty details to create an elevated, immersive experience for Albourne and their conference guests.

There were over 450 guests that attended each event—that’s a lot more than the expected turnout and certainly more than the number of attendees who participated last year. Post-event surveys also showed guests were happy with the experience and because of that, they were eager to join next year’s conference.

Additionally, the client provided feedback post-event to share their experience: “The Concierge Club has state of the art customer care, they make you feel like part of the team, but at the same time, calms your nerve and worry around the event because you know it will be taken care of. They are creative and they get you excited about their plan of action. It’s exciting to see it all come together in the way you envisioned and more.- Jennifer Oldham, Albourne”

Corporate Events with Beauty and Brains

There are many ways to ensure the success of an event, but getting to know your client on a holistic level while identifying new trends and demands so you can develop effective marketing strategies in the future is key.

If you want your conference or corporate event to be a unique experience for your guests, we can help. The Concierge Club is a premium experiential marketing agency that transforms events into immersive experiences.

Get in touch with us today to learn more. 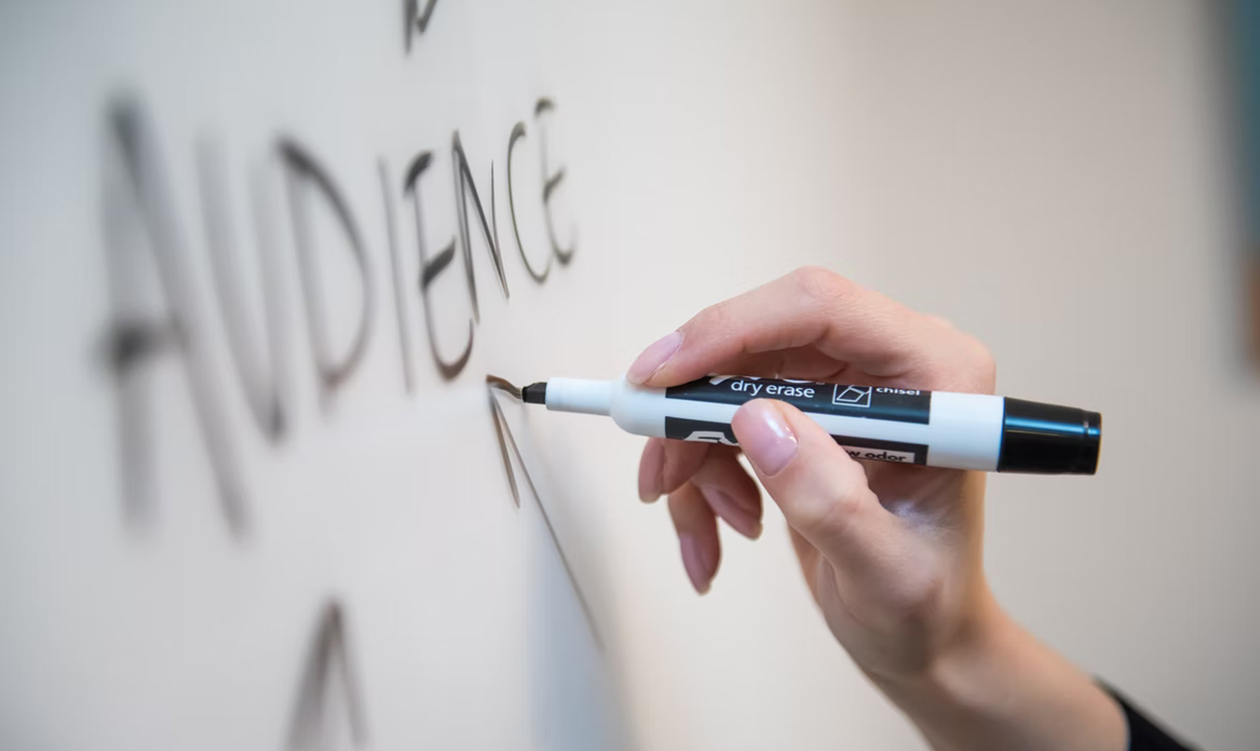 6 Marketing Trends Shaping the Industry in 2023 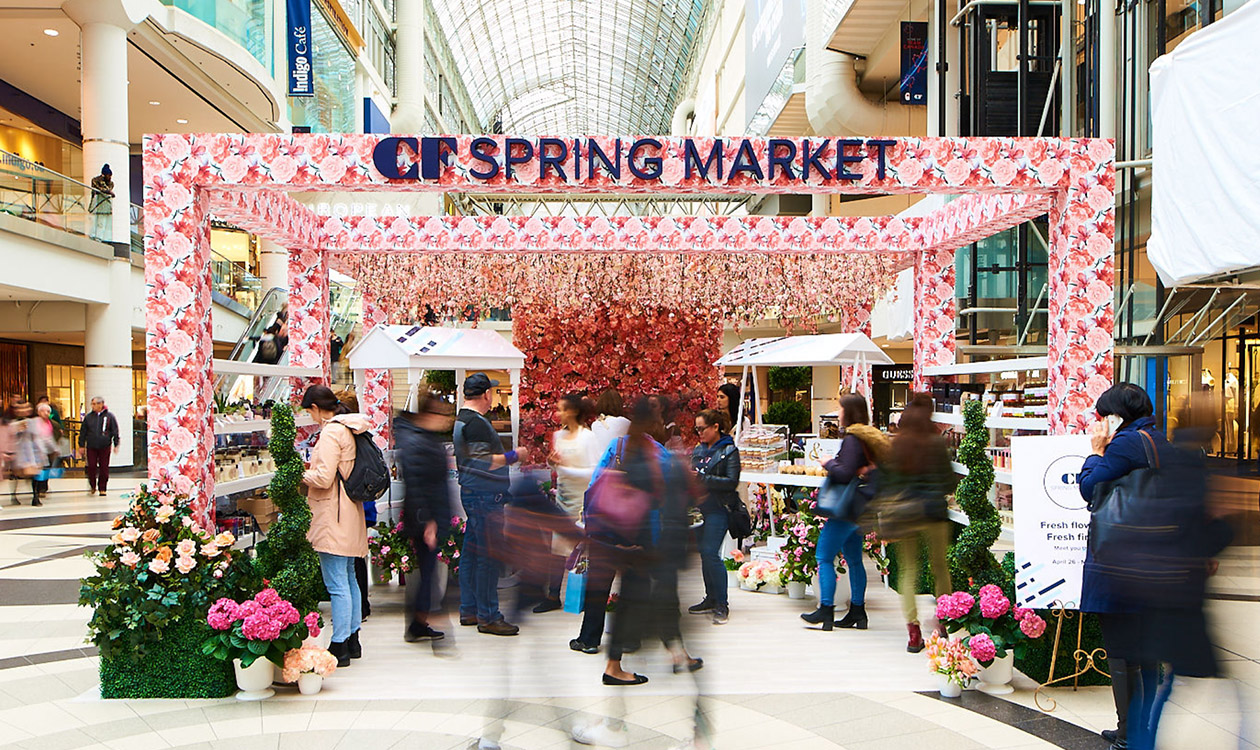 Site powered by The Influence Agency

Site powered by The Influence Agency

Tell us more about the event you are looking to create and we’ll get in touch!